Our Spring Newsletter is here!

Catch up on the latest mountain lion news by checking out our spring newsletter. In this issue, we share what brings us hope, discuss coexistence, and so much more. Join us as Dr. Patricia Cramer has an engaging and informative conversation with Logan Christian about her career studying and promoting wildlife crossings in the United States. Dr. Cramer has 25 years of experience helping identify, prioritize, and implement wildlife crossings to save both human and animal lives. Her insights are invaluable for anyone interested in promoting wildlife connectivity for mountain lions and other species.

Not long ago, many were skeptical of the idea to build special bridges, underpasses and other infrastructure to help wildlife safely cross or avoid roads. Today, however, these technologies are becoming much more common thanks to the efforts of researchers like Dr. Patricia Cramer. Working in over a dozen states, Dr. Cramer collaborates with wildlife managers, transportation planners and many others to identify critical wildlife corridors and choke points where wildlife crossing infrastructure could help prevent wildlife-vehicle collisions. Having kick-started her career modeling movement pathways for the Florida panther, Dr. Cramer also works diligently to ensure that planners consider mountain lions and other native carnivores in the planning and prioritization of wildlife crossings. Join us for a conversation with Dr. Cramer as she discusses what it takes to help wildlife move through the landscape in a rapidly changing world. 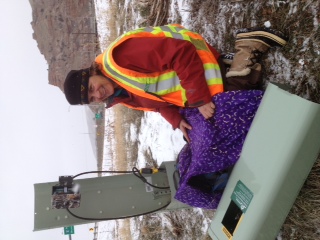 Dr. Patricia Cramer is an independent wildlife scholar. For the past 18 years she has researched wildlife crossing structures and worked to include wildlife concerns in the transportation planning process, with the goal of reducing wildlife-vehicle collisions while promoting wildlife connectivity across landscapes. Her research projects include three national level projects, and work with 14 departments of transportation, mainly in the western U.S. Patricia earned her PhD from the University of Florida in Wildlife Conservation, a Master’s Degree from Montana State University in Wildlife Ecology, and undergraduate degree in wildlife from State University of New York College of Environmental Sciences and Forestry. Governor Jay Inslee has appointed three exceptional new members to Washington State’s Fish and Wildlife Commission. The new Commissioners are: Dr. John Lehmkuhl, a retired wildlife biologist who served for decades with the US Forest Service in the Evergreen State; Melanie Rowland, Esq., a retired senior attorney for the National Oceanic and Atmospheric Administration who also served as Senior Counsel to The Wilderness Society; and Dr. Timothy Ragen, the retired scientific program director, and later executive director, of the federal government’s Marine Mammal Commission.

“By appointing these three scientifically astute commissioners the Governor has taken a giant step towards maintaining Washington’s wildlife and giving a voice to all constituencies of the state,” says Bob McCoy, Chair of the Mountain Lion Foundation’s board, and a Washington resident. “We owe it to our children and grandchildren to maintain the beauty and health of our State’s wildlife, clean water, and our way of life.”

“These appointments show Governor Inslee’s commitment to seeing our wildlife managed according to the best scientific evidence,” says Josh Rosenau, the Conservation Advocate in Washington for the Mountain Lion Foundation. “Too often, the whims of hunters or the fears of ranchers are allowed to overrule evidence that protects people, livestock, and wildlife. We look forward to working with these commissioners to apply science to solving the threats to wildlife and the needs of people in Washington.”

These appointments fill: a seat that stood empty for a year, a position currently filled by the Commission’s chair a year after his term expired, and another seat recently vacated due to a resignation in protest of the Commission’s vitriolic and politicized atmosphere. The Commission makes crucial decisions about hunting seasons and quotas, as with recent votes ending and then reconsidering a spring hunt for black bears and forthcoming decisions about statewide cougar hunt targets. Commissioners balance the desires of hunters with those of wildlife, as in current proposals to kill cougars in hopes that doing so would benefit the herds of Blue Mountain elk without ending the recreational hunting season. The Department of Fish and Wildlife also manages conflicts between carnivores and livestock, and plays a key role in managing salmon populations that wild orcas depend on to recover from the brink of extinction.

Commission terms last up to six years, and commissioners begin service immediately, while awaiting confirmation by the state Senate.

Founded in 1986, the Mountain Lion Foundation is a national nonprofit organization with a mission to ensure that America’s lion survives and flourishes in the wild. The Foundation’s website is http://mountainlion.org. Winston Vickers is a wildlife veterinarian with the UC Davis Wildlife Health Center who has conducted research into mountain lions in California for the last 20 years. In that time, he and collaborators, and other researchers in the state, have learned a vast amount about the mountain lion populations in California, and unfortunately the news has often not been good. The accumulated research has shown that connections between populations across the state have been restricted or in some cases mostly severed to the point of ten separate subpopulations being identifiable genetically. Several of these subpopulations are at risk of significant decline or extirpation due to low annual survival rates, inbreeding, and worsening habitat loss and fragmentation. In this talk Dr. Vickers will detail the latest scientific findings from across the state that are guiding actions that may increase the odds of long term persistence of puma populations, what individuals can do to assist in their conservation, and will talk about his personal pathway into mountain lion research and conservation. Dr. Vickers is a wildlife research veterinarian with the University of California-Davis Wildlife Health Center and the Institute for Wildlife Studies. He obtained his DVM at Oklahoma State University and practiced on large, small, and exotic species for over 20 years before returning to school to get his Master of Preventive Veterinary Medicine at UC Davis with a focus on wildlife disease and ecology. He has been studying mountain lions and other wildlife for 20 years and directs the UCD Wildlife Health Center’s mountain lion study. He collaborates extensively with other mountain lion researchers, NGO’s, and governmental agencies in the state and elsewhere in the West, and his studies of mountain lions address issues of mortality, connectivity, habitat use, genetics, disease, conservation, and reducing negative interactions with humans and livestock. He also collaborates on studies involving other wildlife species studies, including bobcats, Channel Island foxes, Santa Cruz Island scrub jays and other avian species. He worked for many years with the Wildlife Health Center’s Oiled Wildlife Care Network on oil spill response, and is the author or a co-author of over 35 peer reviewed publications, one book chapter, and numerous white papers and reports to wildlife and other government agencies. He co-developed and directed a 9-part series of short educational documentaries about mountain lions, as well as a one hour film, that have been viewed nearly 1.8 million times and can be viewed here (https://www.camountainlions.com/). His work has been featured in numerous articles in the newspapers and in several books, and he has twice been named one of the 100 most influential individuals in Orange County, CA by the Orange County Register. Arizona is proposing new hunting regulations that will have serious impacts on the native carnivore populations in the state and the ecosystems they depend on. We need your help in advocating to make these new rules as strong as they can be to protect mountain lions and other native carnivores.

Please join the Mountain Lion Foundation, Center for Biological Diversity and Humane Society of the United States for a webinar on the proposed changes being made to the Arizona hunting guidelines. Our staff will explain the changes and how you can help to make sure they do not have a devastating impact on mountain lions, bobcats and bears. Our winter newsletter is here!

Catch up on the latest mountain lion news by checking out our winter newsletter. In this issue, we share our resolutions for the upcoming year, thank you for your support, and so much more.

Join us as David and Mary Miller have an engaging and informative conversation with Logan Christian about their success using non-lethal predator deterrence and regenerative agriculture practices. With over 25 years of experience, David and Mary’s expertise and insights can be used by other farmers and ranchers, no matter how small. David & Mary Miller raise lambs and livestock guard dogs on their ranch in Crowley County. They started their own business, Triple M Bar Ranch, in 1994. Triple M Bar Ranch is a family-owned and operated ranch in Southeastern Colorado. They take pride in raising naturally grown lamb and Livestock guard dogs that are born and raised with their sheep. David and Mary are the main ranch hands. Their ranch headquarters sits on Buckeye Hill in Crowley County on the bluffs overlooking the Arkansas River Valley. They also have grazing land in the valley along the river. Mountain Lions in Tehachapi the things you should know

In this edition of our audio podcast ON AIR, MLF Volunteer Robin Parks spoke to the Tehachapod, a podcast regarding Tehachapi and surrounding communities, on the topic of about these big cats that call Tehachapi and California home. They separate myth and facts about these predators that live in nearby mountains. Robin explains how to be better pet owners when living in rural areas. He also explains how mountain lions truly want nothing to do with humans and generally leave the area when they hear the human voice. They also talk about misidentification of mountain lions and things you can do if you ever do encounter one of these animals while out in their habitat.

“FUZZ: When Nature Breaks the Law” – A conversation with author Mary Roach FUZZ: When Nature Breaks the Law.  In her new book beloved science writer Mary Roach wrangles a question that has defied satisfactory resolution for centuries: What is the proper course of action when nature breaks laws intended for people? Roach approaches this question with the same keen wit she previously applied to sex (Bonk), death (Stiff), ghosts (Spook), and space (Packing for Mars).

Roach’s globe-spanning survey covers drunken elephants in India, seagull vandals in the Vatican, and our beloved mountain lions in California. She reveals how peace between species is tantalizingly within our reach—if only we could do a better job of keeping respectfully apart.”

Join us for a conversation with author Mary Roach as she discusses her book – “FUZZ: When Nature Breaks the Law” with Mountain Lion Foundation’s own Jessica Janson.

Mary Roach is the author of the New York Times bestsellers STIFF, SPOOK, BONK, GULP, GRUNT, and PACKING FOR MARS. Mary has written for National Geographic, Wired, and The New York Times Magazine, among others, and her TED talk made the TED 20 Most Watched list. She has been a guest editor for Best American Science and Nature Writing, a finalist for the Royal Society’s Winton Prize, and a winner of the American Engineering Societies’ journalism award, in a category for which, let’s be honest, she was the sole entrant.
https://www.maryroach.net/fuzz.html